An Apple a Day

Now that I’m back I need to just update a couple of things.  For those of you who were following along on my weight-loss, here’s the skinny.

When our Weight Watchers group was abruptly closed by the company when our leader, who was fabulous, became ill,  I realized the only one I could truly count on in my efforts to lose weight was myself.  My husband is incredibly supportive, but at the end of the day, it was up to me.  As it should be.  But I was scared.

Even the little bit of success I’d had with WW felt like a major achievement and the thing I feared most was putting the weight back on, as I’d done after losing 50 pounds on Nutri-system.  I was NOT going to let that happen.

Over the summer, while I kept my WW online membership, I did not track.  I did, however, try to continue the healthier eating habits we’d established.  I was determined to listen much more closely to my body and give it what it was really needing rather than what I thought it might want.  And I gave up Diet Coke almost completely, switching to water instead.  I now drink approximately 3 to 4 liters of water a day.  I eat salad….and chicken…..and fresh-baked artisan bread.  I eat potatoes and pasta and rice.  I even sometimes eat cake.  All in moderation, of course.  And my body is happy.

I don’t get it.  I was really frustrated with the lack of downward movement on the scale so I decided to take a break.  I decided to not track my eating this week and relax a little bit.  I didn’t really over-eat, I just didn’t “do” the program.  I needed to not think about it for a week to just cut myself some slack.  We didn’t do anything outrageous:  made lasagna for my favorite kid, went out for Chinese Smorg before a really great jazz concert, had a couple Apple Ciders.  And after all that…….

Things appear to be cruising along nicely.  There were periods of temptation over Spring Break due to visiting children, however scattered salads mitigated any major damage.  The forecast is for light meals with periods of moderate exercise, hopefully precipitating continued success.

I now return you to your normal internet programming.

I didn’t post last night because I was really, really mad.  I was up 1.8 lbs.  Grrrrrrrr……

Thank god for my group though.  I do a lot of things online, but nothing online can compare to having a group of fabulous women supporting you in person.  They were upset for me too.  They started looking for reasons why this might be happening.  They groaned too when they heard that my husband eats EXACTLY what I do and yet has lost 20 pounds to my 6.  And then they asked if I was in menopause.  Apparently I am.  Things happen without warning.  I can go months happily thinking I’m done with the inconveniences associated with being female and then *WHAMMO*……my body decides to throw me a curve.  Which it did this morning.

And the Hubby of the Year Is…..

I am incredibly blessed to have the single most patient, understanding, and supportive husband in the whole world.  He’s always there for me, supporting without pushing, encouraging without making a big deal out of everything, and just generally being ok with who I am, no matter what.

That makes this whole Weight Watchers journey soooo much easier.  He happily eats whatever I serve.  He always has, but he never complains that there’s something missing.  He doesn’t bemoan the lack of gravy, doesn’t whine about the low-fat cheese, doesn’t ever say “let’s just cheat and go to DQ”.  He does have some pounds he wants to drop, but he could easily make me feel like this process is somehow depriving him.  And he doesn’t.  EVER.

He also loves my Smashed Cauliflower.  Now he’s a real meat-and-potatoes type of guy.  He loves steak and prime rib and thinks Emeril’s right and “Pork Fat Rules”.  He’ll eat potatoes baked, mashed, scalloped, au gratin, steamed, grilled, roasted and fried.  He’ll eat instant potatoes with that Kraft Cheese powder that’s a shade of orange just short of radioactive.  And yet, Smashed Cauliflower has risen to the top of his Potato-list, even though he knows there’s not a single iota of potato in it. 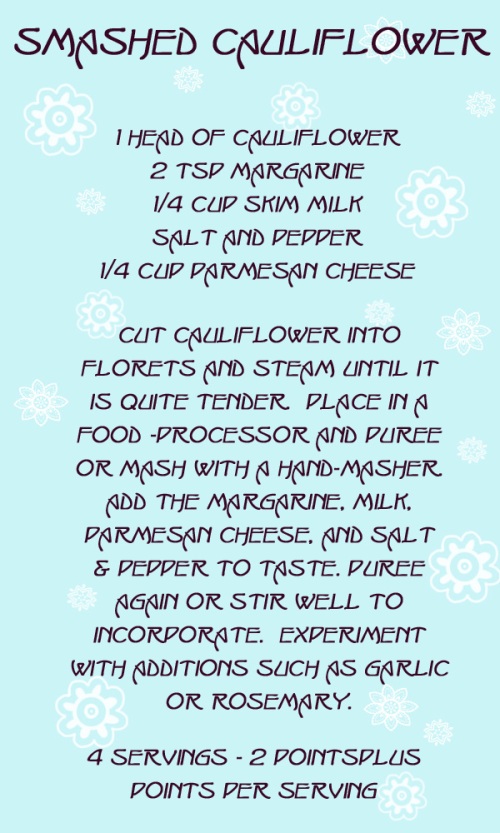 Try this in place of mashed potatoes.  Heck, try it in place of any kind of potatoes.  It’s positively yummy.  Just ask my hubby…..he loves this stuff.  He’s also lost 16 pounds.  Yay Rick!!!